Jim Waide Named One of Top Ten Lawyers in Mississippi

Jim Waide, a native of Clay County, Mississippi, and founder and managing partner of Waide and Associates, PA, was named one of the Top 10 Lawyers in Mississippi by the Mississippi Business Journal. Waide was honored at a dinner in Jackson, Mississippi on November 4, 2010.

Four of Waideís cases have been accepted by the United States Supreme Court. Waide considers the most significant of those cases to be Reeves v. Sanderson Plumbing Products, Inc., which limited the authority of federal judges to overturn jury verdicts, and Wyatt v. Cole, which abolished immunity provided to parties in cases brought 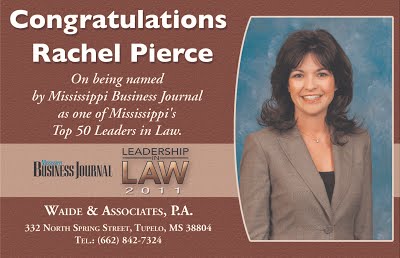 TUPELO, Miss. – Tupelo’s “40 and under” set of professionals in the area have been recognized for their contributions to Tupelo and twenty have been named as “Tupelo’s Top 20 Young Professionals.”

The award was organized by Greater Tupelo Magazine, which took nominations for professionals between the ages of 21 and 40, had them judged by an independent panel of business professionals and is recognizing these winners for
their extraordinary on-the-job performance by a person, their community involvement and their recognitions.

“We received many nominations for outstanding young professionals,” stated Wesley Wells, owner of Legend Publishing. “The twenty chosen are just a sample of the fine young business people that work actively in our community everyday.”